Single Shackleford Stallion Looking for That Special Someone 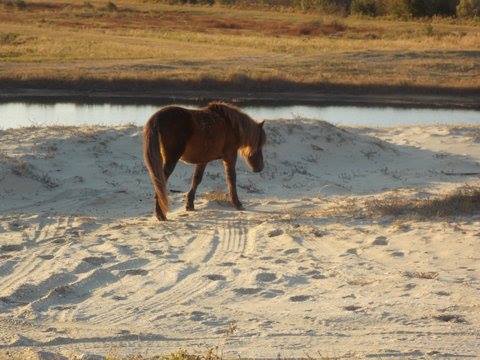 Meet Gus. This hot young stallion just moved to OBX from Cedar Island. He likes long walks on the beach and getting caught in the rain, and he’s looking for love… among the Corolla wild horse herd, that is. Gus is a big deal.
The Corolla wild horses are suffering the consequences of limited genetic diversity. Just as prolonged inbreeding of dogs or cats can result in increased risk for health concerns, the horses have started to experience some birth defects because the entire herd is down to a single maternal line. Without introductions of unrelated horses from different maternal lines, the Corolla horses would eventually experience a genetic collapse.
The situation had gotten pretty dire, and the dedicated team at Corolla Wild Horse Fund has been campaigning for years to introduce some fresh blood into the herd without accidentally eradicating the unique species that is the Corolla Colonial Spanish Mustang. The only way to add genetic diversity while protecting the ancient and rare bloodlines of the herd would be to introduce another Colonial Spanish Mustang.
That’s where Gus comes in. He’s from a herd of genetically identical horses 250 miles away in the Shackleford Banks, near Cape Lookout National Seashore. These are the same Colonial Spanish Mustangs as the Corolla herd, but they have maintained greater genetic diversity through the years. Gus was born wild and free in Cedar Island, NC, and his mother was a wild mare that had been removed from the Shackleford wild horse herd for population control.
In July 2014, Karen McCalpin, Director of the Corolla Wild Horse Fund, pulled a DNA sample from Gus via dart gun. The DNA sample was sent to Dr. E. Gus Cothran, a world-renowned geneticist and wild horse expert at Texas A&M University, and extensive DNA testing was performed to make sure that Gus was a perfect fit. Dr. Cothran (Gus’ namesake) verified that Gus was an excellent candidate to introduce into the Corolla herd. After a few more tests and veterinary exams were conducted and the weather had cooled down to make the journey less stressful, Gus got into a trailer for the ride of a lifetime.
Since being released in Corolla on November 19, 2014, Gus has been settling into his new surroundings nicely, but it might be a while before he finds “the one” (Note that a young stallion like Gus might acquire up to five mares in his harem, so “the one” might be “the several”). McCalpin estimates that it could be 2015 or even 2016 before Gus hears the pitter-patter of little hooves.
That’s okay, Gus. Take your time. You are Corolla’s most eligible bachelor, after all.