When visitors ask us where they can find the most spectacular views in Corolla and Currituck County, the most common answer is the observation deck of the Currituck Beach Lighthouse. Standing tall in Historic Corolla for over a century and a half, this stately tower continues to guide ships to keep a safe distance from the chain of barrier islands along the Outer Banks coastline. With National Lighthouse Day coming up on August 7, we would love to re-introduce you to one of our favorite local attractions.

It takes 220 steps to get to the top of the lighthouse, so you will want to wear comfortable shoes for the ascent. The winding spiral staircase within the lighthouse’s unpainted red brick walls isn’t the only point of interest on your self-guided tour, either. When you visit, be sure to spend some time in the ground-floor archives room and browse the historic photos and correspondence of past lighthouse keepers. Additional exhibits on the first three landings also feature displays on the tower’s history, its original construction and subsequent renovation efforts. 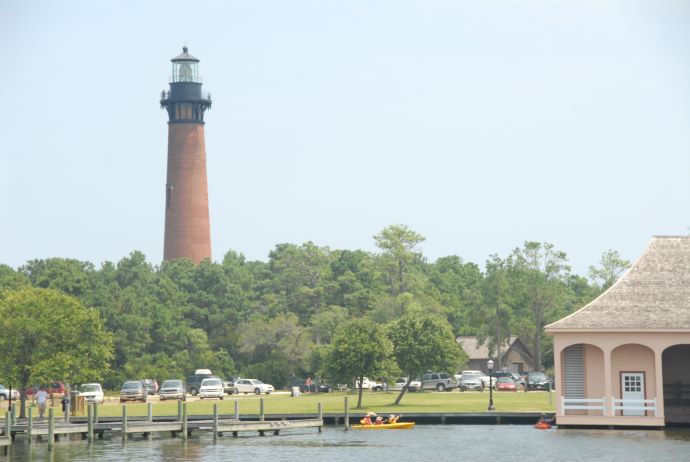 See you at the top?

In the spirit of National Lighthouse Day, we’re happy to share more Currituck lighthouse fun facts to enhance your experience:

Currituck Beach Lighthouse is open daily, weather permitting, from 9 a.m. to 5 p.m. Admission to climb the tower is $10 per person ages 4 and up, and children 3 and under in carriers are admitted free. While you’re in Historic Corolla, don’t forget to see the other attractions in the area, including the newly opened Currituck Maritime Museum, which also features fascinating information about the lighthouse.

Download the Corolla OBX app on your phone, too, for a complete guide of everything to see and enjoy on your Currituck vacation.