Currituck County enjoys a rich heritage that parallels much of our nation’s history. Visitors have been coming to our shores since the 1600s – the Wild Mustangs seen on our beach today are evidence of their exploration. 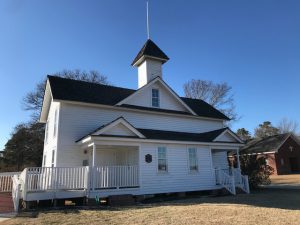 Much later, after the Civil War, Currituck residents helped establish a greater community for freed African-Americans in the area. The county’s first school for black children opened around 1867 in Powells Point, then moved years later to where it now stands as the Historic Jarvisburg Colored School Museum.

A landmark on the mainland, the museum serves as a time capsule, perfectly preserving a glimpse into the lives of black youth from the late-19th to mid-20th centuries. This attraction is open for much of the year, but special attention is given during Black History Month as visitors embrace the stories of the young people who came to learn.

Jarvisburg Colored School evolved over the years. The first iteration of the school was established in the 1890s with its relocation to Jarvisburg. The original structure of the existing school museum was completed in 1911, and children attended the school through 1950, when Currituck Union School opened to accommodate students from all the closed black schools in the area.

Restoration began over 20 years ago. The first efforts to save HJCS, which had become structurally unsound in the 1970s after use by various organizations, happened in the late 90s. Area alumni felt the building had a place in national as well as local history and sought to repair and restore the two-story school as close to its original appearance as possible. Cypress boards were brought in to replace the old wood exterior, and furniture and artifacts used for the school were taken out of storage to be put on display.

In the end, the hard work paid off. The Historic Jarvisburg Colored School was added to the National Register of Historic Places in 2009. The museum’s website has more details on the building’s restoration.

There are many ways to support HJCS. Donations help maintain the museum for visitors to enjoy, and currently there are three ways to help:

The Historic Jarvisburg Colored School Museum is open on Wednesdays, Thursdays, and Saturdays from 10:00 a.m. to 3:00 p.m. Schools and other large groups (up to 60 people) may arrange for a private tour by appointment. Please contact [email protected] for more information. Admission is free.