The Corolla Wild Horses: 12 Things You May Not Know 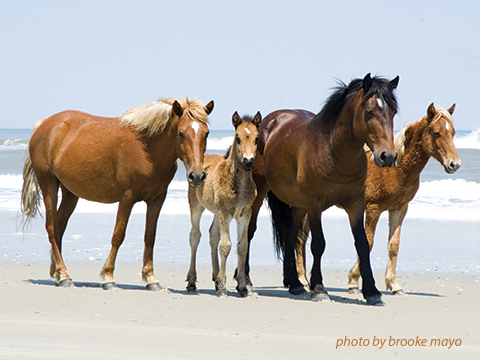 Corolla’s famous wild horses have roamed the beaches and backwoods of the northern Outer Banks for centuries. During that time, they have dazzled countless visitors and inspired a lot of questions. We asked Karen McCalpin, Executive Director of the Corolla Wild Horse Fund, to answer some of the most frequently asked questions about these amazing creatures.

12. Do the wild horses live in a wildlife refuge?

The wild horses were moved to the northern 4 wheel drive beaches of Corolla in 1995 because the extension of the paved road from Duck to Corolla was compromising their safety. They now have access to 7,544 acres (3,331, acres are public land and 4,213 are privately owned). They do not live in a wildlife refuge or sanctuary.

11. Does someone take care of them?

There was no actual “management” of the wild herd until late 2006 when the not-for-profit Corolla Wild Horse Fund hired the first full-time professional Director and Herd Manager. Today, four full-time and 19 seasonal employees work tirelessly to protect and conserve the horses, assisted by many dedicated volunteers.

10. Are they really of Spanish origin?

DNA testing was conducted in 1992 and 2007 and analyzed by renowned equine geneticist, Dr. E. Gus Cothran of Texas A&M University. A physical inspection was also conducted by the Horse of the Americas Registry and the American Livestock Conservancy. The results of both tests determined that the Corolla wild horses are of Spanish origin and are eligible for registration as Colonial Spanish Mustangs. They are one of the oldest and rarest strains left in the world and are listed as a critically endangered/nearly extinct breed.

9. Were there more wild horses on the Outer Banks in recent history?

According to National Geographic Magazine, in 1926 there were between five and six thousand wild horses on the 175 mile stretch of the Outer Banks. In 1938, when the National Park Service began to buy up the land for Cape Hatteras National Seashore, they put a bounty on wild horses.

8. How many Corolla wild horses are there?

There are currently only 100 horses left in the Corolla herd. The Corolla Wild Horse Fund determines the “official” count by helicopter each year in late September. Field notes are maintained on all births and deaths between aerial counts. The scientifically recommended size for the Corolla herd is 120 to 130 with never less than 110; however, the current management plan calls for a maximum herd size of 60.

7. Are the Corolla wild horses the only Spanish Mustangs on the Outer Banks?

No. Another wild herd of Banker strain Colonial Spanish Mustangs is on the Shackleford Banks (Cape Lookout National Seashore). They are managed by the National Park Service (with a Memorandum of Understanding with the not-for-profit Foundation for Shackleford Horses). This herd was federally protected in 1998 by the Shackleford Banks Act and is mandated to be managed at 120 to 130 horses, with never less than 110.

6. Why aren’t there more wild horses in Corolla?

Efforts to change the Corolla management plan to the recommended herd size of 120 to 130 with never less than 110 (same as the Shackleford horses) have been vigorously blocked by United States Fish & Wildlife Service, who define wild horses as a “non-native, feral invasive species.” The Corolla Wild Horses Protection Act (mandating the higher herd size) has passed the United States House of Representatives unanimously in 2012 and 2013 but the US Senate has still failed to act on the bill.

5. How are they different from regular horses?

The Colonial Spanish Mustangs of Corolla have several distinctive physical characteristics. They have five lumbar vertebrae as opposed to the six present in the majority of domestic breeds. Their tails are extremely low set on a sloping croup. Head shape is generally convex, the face is narrow and fine, and the ears curve delicately at the tip. They are narrow through the chest when viewed from the front and appear to be “v” shaped (upside down) rather than flatter and broad. Some are naturally gaited. All are highly intelligent, athletic, sensible, and easy to train.

4. How are they different from the wild horses on the Virginia coast?

The wild horses of Corolla are not the same as the ponies of Assateague and Chincoteague in Virginia. Although the Corolla horses are small (between 12 and 14 hands at the shoulder), they are horses, not ponies. The ponies of Assateague and Chincoteague have been mixed with a variety of breeds over the centuries. The Corolla horses have remained Spanish.

3. Why is it dangerous to feed them?

Wild horses eat a very specialized diet of sea oats, coarse grasses, acorns, persimmons, and other native vegetation. When they ingest apples, carrots, or other non-native foods, they are at great risk for painful colic at best and death at the worst. It is against the law to intentionally get within 50 feet of a wild horse or to feed them.

2. Why do I always see groups of horses on the beach?

Wild horses are very territorial and generally stay in the same range in which they were born. They travel in harems. A harem consists of a dominant stallion and one to four mares. Stallions that are too old, too young, or not dominant enough to challenge another harem stallion, form their own family group called “bachelor stallions.” The lead mare makes the decisions about when and where the harem will go and the stallion is the protector. They move between 15 and 25 miles per day with their range. Stallions fight viciously over mares and frequently try to “steal” mares from other stallions.

1. Is the Colonial Spanish Mustang the state horse of North Carolina?

Yes! The wild Colonial Spanish Mustang, which includes the wild horses that live in Corolla, were designated as the North Carolina State Horse in 2010.