Everywhere you look in Currituck now, spring is in bloom, and that means new life in every respect. This is the prime season not only for our Mustang dams to bring new foals into the herd, but for area sea turtles to nest on our shores. Currently the amazing volunteers at the Network for Endangered Sea Turtles, or N.E.S.T., are working hard to ensure their numbers increase this year. 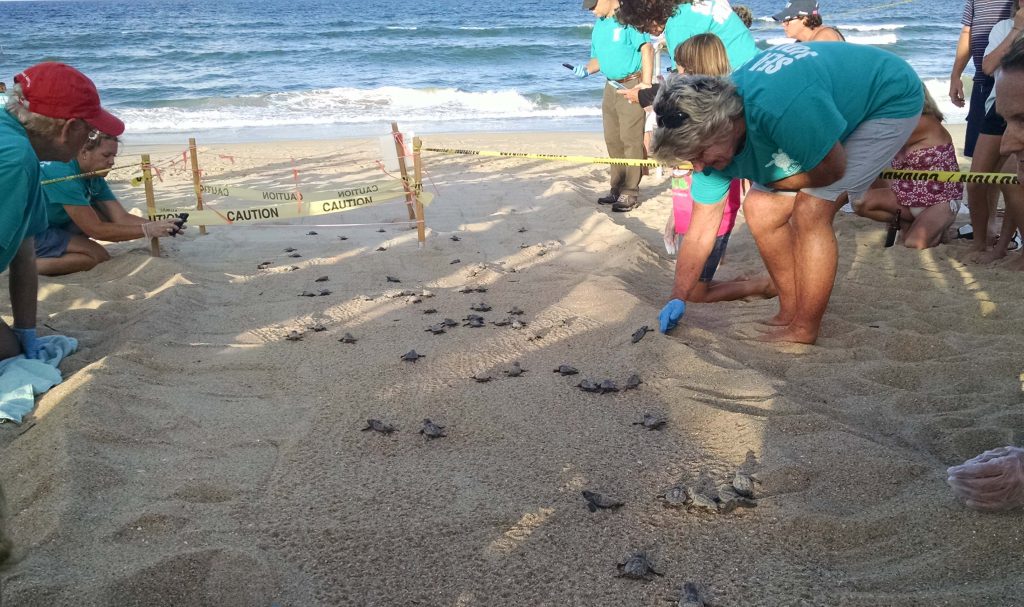 According to John Cece, president of N.E.S.T., volunteers patrol the shores throughout the Outer Banks, including the Corolla and Carova beaches, during the prime nesting and hatching seasons. Starting around mid-May, adult female turtles will come ashore at night to lay eggs, and once they are done they will return to the ocean. Of the seven different species of sea turtles in existence, Loggerheads comprise ninety-five percent of the hatchlings found in the area, with the remaining numbers divided between the rarer Green and Kemp’s Ridley turtles.

The best way to tell if a sea turtle has been ashore is to look for their tracks, which are said to resemble tractor tire treads. Aside from the laying, adult turtles have no involvement with their young, leaving their babies alone to brave the journey from hatching to the water. Yet, since 1995, N.E.S.T. have assisted the sea turtles with contactless assistance, from monitoring the health of nests to smoothing and edging the pathways to the water for that arduous journey.

According to Cece, the Currituck area may see anywhere between five and ten nests per season, which stretches through August. Each nest may contain as many as one hundred eggs. The actual number of hatchlings and successful treks from nest to ocean, however, varies. Because sea turtles are protected by the Endangered Species Act, Cece says that N.E.S.T. cannot reveal the actual locations of nests. 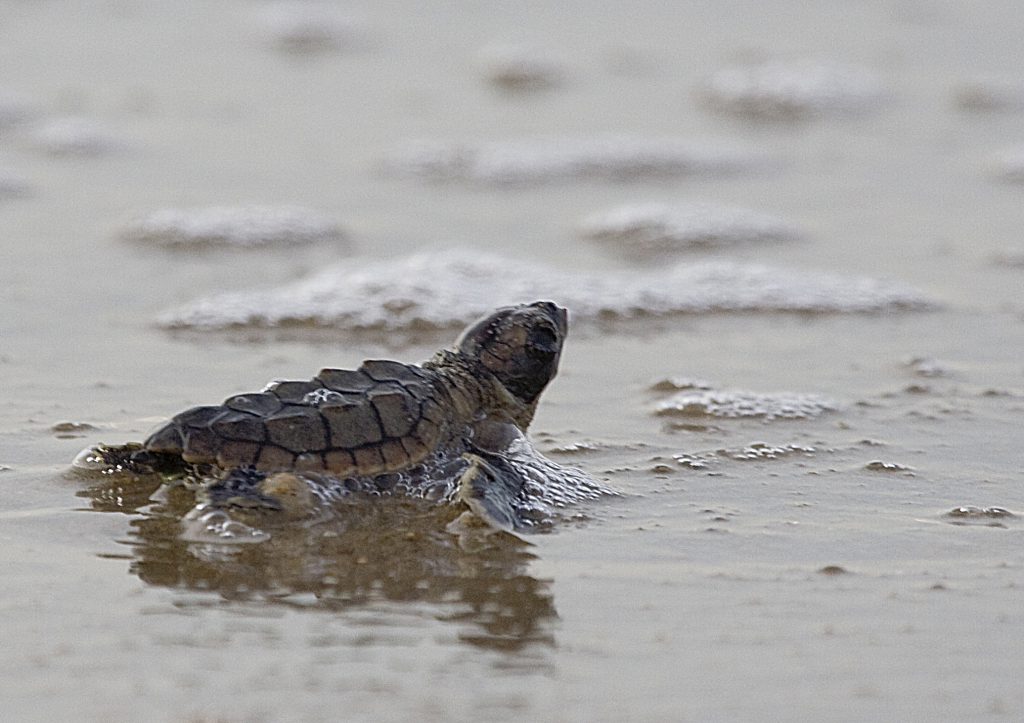 Almost there! Photo by Jackie Orsulak, courtesy of N.E.S.T.

If you plan to visit Corolla in July and August, though, you may have an opportunity to see the sea turtles emerge from the sand. During your stay, there are several ways you can help preserve their numbers:

Do not touch!  If you see a tagged nest, leave it alone. It is illegal to take eggs and hatchlings from a nest — sea turtles are not pets — and violators can face fines and jail time if caught and convicted. If you spot an adult turtle or hatchling in distress, Cece advises to not touch the turtles but call N.E.S.T.’s 24/7 hotline at 252-441-8622 and a volunteer will come to the rescue.

Turn off your lights at night. If your vacation rental is located on a part of the beach with active nests, N.E.S.T. advises to turn off all outdoor lights after sundown, and to close blinds and curtains where appropriate to keep indoor lights from shining on the beach. Baby sea turtles emerge mostly at night and use the light reflected on the ocean to guide them down the right path. Light sources from other places will disrupt the turtles and can put them in harm’s way.

Keep our beaches clean. Plastics left on the beach can harm adult sea turtles and their young. It is also advised not to leave your “mark” on the beach — i.e. leaving your chairs and tents behind for the next day — as adult turtles can get tangled in beach furniture.

Fill in the gaps. Deep holes in the sand are not only potential dangers for adult turtles crawling on the beach, but for N.E.S.T. volunteers patrolling in their ATVs. If you spent the day digging in the sand to make a castle or if you planted an umbrella, fill in all holes before you leave.

Maintain a safe distance. While N.E.S.T. does not publicize locations of active nests, if you happen to be on the beach during an emergence you may stay and witness the young turtles’ incredible trek. N.E.S.T. volunteers, identifiable in their bright green t-shirts, will have partitions available, behind which visitors can watch the hatchlings in action. Cece said it is important that no flash photography or phone lights are trained on the turtles so they are not distracted and wander off in the wrong direction.

To learn more about the amazing work of our area N.E.S.T. volunteers, visit their website or Facebook page.