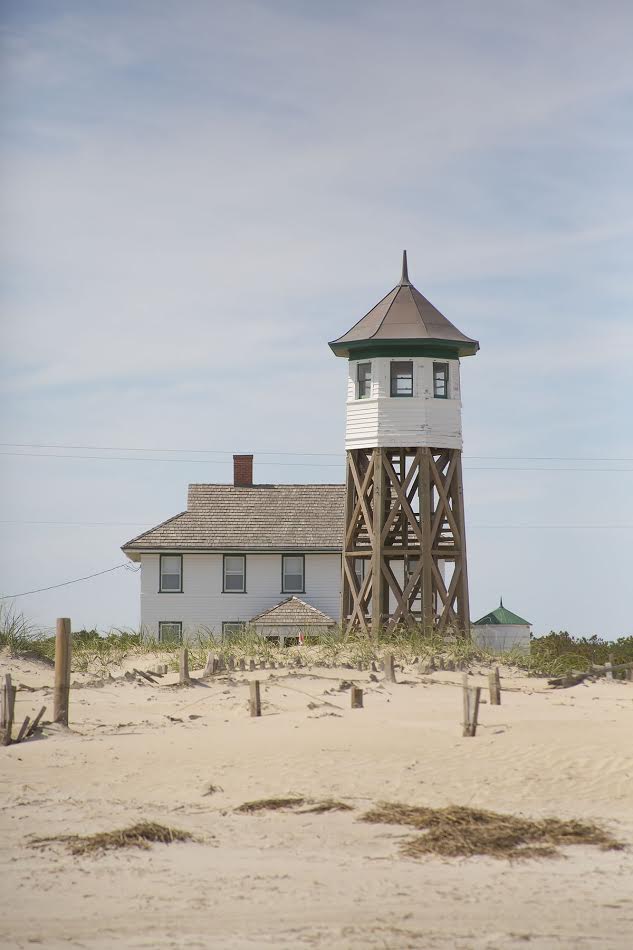 The small white house and its lookout tower on this northern stretch of beach in Currituck County have faced the churning waves of the Atlantic ocean for nearly 100 years.

Unlike the sprawling, luxury beach houses for rent in this remote area accessible only by off-road, 4×4 vehicles, the old house with its heart pine floors and small porch pays tribute to an architectural style that faded decades ago.

This was once the Wash Woods Coast Guard Station. A home for a handful of men willing to risk their lives whenever a passing ship ran aground in the coast’s treacherous shoals.

Restored over the years by the Twiddy family, the Wash Woods Station today serves as an office for Twiddy & Company Realtors. The boathouse was rebuilt in 2007. A replica of the original 1917 tower was finished five years ago, according to the realty company.
It’s uncertain when the first ghost stories began. A few people who stayed at the station when it was part of a property management program reported several strange phenomena.

A light flickered on by itself. Then turned off.

Sometimes doors slammed out of the blue.

Was someone there? Not that anyone could see.

Others said they just got a weird feeling at the station.

As the stories grew, people chalked it up to a ghost. They named him Mose.

Toni Lear, marketing manager for Twiddy & Company Realtors has never seen or experienced anything spooky at the station, but she’s heard quite a few stories about Mose.

When it comes to ghost stories, Mose is just one of many tales that circulate amongst locals and visitors in the Outer Banks. In Corolla, people visit the Whalehead Club to see if there’s any truth to the story of a little girl haunting the basement. At the Currituck Beach Lighthouse, visitors always want to know if it’s true there’s a ghost in the north room of the lightkeeper’s house.

Perhaps the scariest stories are the ones that end east of the beaches, straight into the shallow waters of the Atlantic ocean where so many ships wrecked, tossing passengers into heavy surf and strong currents.

From these tragic deaths is how Wash Woods Station came to be.

In November 1877, the USS Huron became stuck 200 yards from the beach at Nags Head around 1:30 a.m., according to the North Carolina Office of State Archaeology. Ninety-eight people died. Two months later, the steamship Metropolis, once a Union warship, took on water during a storm and broke apart three miles south of Currituck Beach Lighthouse. Scores of passengers and crew drowned despite rescue efforts, according to published reports.

The horrific shipwrecks offshore of the Outer Banks prompted an uproar nationwide. Within months, Congress took action to increase funding and reorganize the U.S.
Life-Saving Service and its coastal stations.

Just south of the Virginia border, the service built Deals Island Station #6 in 1878, according to U.S. Coast Guard records. It was eventually renamed Station Wash Woods for the small community that once existed a few miles north of the state line. In 1917, the U.S. Coast Guard, which evolved from the U.S. Life-Saving Service, replaced the original station with a new structure relocated to where it stands today.

The men who first lived in these stations – surfmen – patrolled the beaches on foot or by horse in the blackness of the night, watching the seas for any signs of a flare – the signal for help. After firing a flare of their own to let the sailors know help was coming, the surfmen organized quickly to make their rescues, according to historians.

No matter what time of day or night, if a ship was in distress, the surfmen would use a surfboat or lifeboat to head into the raging waters, putting themselves at risk every time.
Their efforts saved many lives.

If a ghost exists at Wash Woods Station, could it be one of the victims from a shipwreck?

Perhaps it’s a surfman, high up in the tower, keeping good on his promise to watch the seas.

Find the perfect place to stay in Currituck County for your next vacation to the Outer Banks.

Alice Warchol is a freelance writer based in Chesapeake, VA.