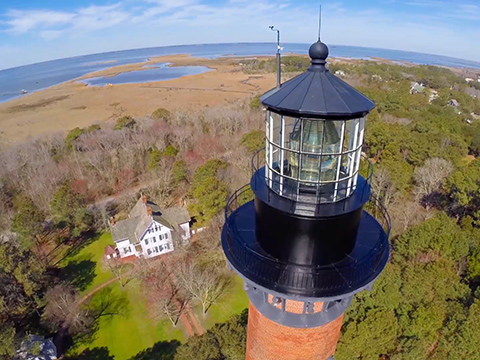 Standing watch for over a century, the Currituck Beach Lighthouse in Corolla, NC has a rich history. While some facts are clearly observable — the 220 steps, the unpainted red brick exterior — other details about this lighthouse are not so widely known. We asked Meghan Agresto, Site Manager and Lighthouse Keeper, to provide some uncommon knowledge and interesting facts about the lighthouse.

20. Between 1875 and 1933, while the lighthouse was oil-burning, three flash panels covered with ruby-red glass were used on the enormous, first-order Fresnel lens to create a unique flash pattern. This let mariners know where they were so that they wouldn’t come in too close.

18. The big Y-shaped path in front of the lighthouse divides the site so that each side of the house has its own walkway to the lighthouse.

17. The original parcel of federally owned land on which the lighthouse sits (extending from the Currituck Sound to the Atlantic Ocean) was transferred to the State of North Carolina in the 1950s to be used for muskrat research.

16. One of the former assistant lighthouse keepers, William Riley Austin, served for 36 years. That’s more than half the time the lighthouse burned oil for light, which means that the light only used an oil lamp for 18 years without his help.

15. The first fuel for the lighthouse was lard. This was used for about 10 years (after which it was switched to kerosene “mineral oil”).

14. Until recent years, it was not unusual for lighthouse keepers to find Corolla wild horses on site.

13. The small Keeper’s Dwelling was not built on site but arrived on a barge in 1920 by crossing the shallow Currituck Sound.

12. The Keeper’s House was host to 76 survivors of the Metropolis wreck of 1878. That’s a lot of people, even for what seems like a big house!

11. The famous Charleston, South Carolina earthquake in 1886 was felt by keepers at the top of the CBLH: “The shock caused the lens to rattle and suspended objects to swing.”

10. The local one-room schoolhouse was built in the late 1890s for the lighthouse keepers’ children. In 2012, it was reopened as North Carolina’s smallest charter school.

9. The only totally identical site to the Currituck Beach Light Station is Morris Island Light Station in South Carolina. The latter is now surrounded by water and has only part of the original lighthouse remaining.

8. Identical Keepers’ Dwellings were built at three other light stations — Morris Island and Hunting Island in South Carolina and Piedras Blancas in California. None of these other three dwellings are extant.

6. Currituck Beach Lighthouse’s “graphic representation” was featured at the 1876 Centennial Exhibition in Philadelphia. The recently built “first order” lighthouse (so called because of its first-order Fresnel lens) and dwelling were a source of pride for a 100 year-old nation.

5. The Currituck Beach Lighthouse is privately owned by the Outer Banks Conservationists, Inc., a private non-profit organization that began restoration of the tower in 1990.

3. The quiet, romantic, oceanside life wasn’t always a happy one. Assistant Keeper, Horatio Heath, was accused of poisoning another keeper’s dog in 1878, soon after the tower was built. One keeper had two children die here while on site; one of pneumonia at age 1 and one of drowning in VA beach at age 15.

2. The last keeper of the Currituck Beach Lighthouse who worked as an employee of the Bureau of Lighthouses was Bill Tate, the man credited with bringing the Wright Brothers to Kitty Hawk.

1. The Currituck Beach Lighthouse still has on-site lighthouse keepers (who have two children and a lighthouse dog who watches guard!).