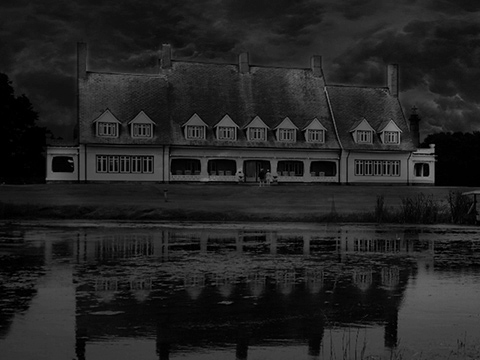 Built in 1922 by Edward Collings Knight, Jr., Corolla’s well-known Whalehead Club has been the backdrop for countless ghost stories and spine-tingling experiences. While the Corolla area of the northern Outer Banks is full of creepy history – including buried pirate treasure and numerous shipwrecks – the unique history of the Whalehead Club and the sheer number of seemingly supernatural events that have occurred on its grounds make it a must-see.

Professional researchers and paranormal experts have spent their fair share of time in the house, concluding that there is definite paranormal activity in Whalehead. There are numerous accounts of mysterious sounds from unoccupied rooms – museum guides and volunteers have heard pots and pans clattering in the empty kitchen, music playing throughout the house, and doors slamming in the old servants’ wing.

The spooky events are nothing new: In the 1960s, the Atlantic Research Corporation used Whalehead as a test site for rocket fuels because it was a remote location. One employee, a security guard who lived in Corolla, was authorized to use the building to weather a hurricane. He and his dog walked over from Corolla Village to hunker down and wait out the storm, choosing an area near the top of the stairs and away from any windows as their camping spot. Shortly after the storm started to rage, his dog began barking uncontrollably at something in the corner – and while he couldn’t see anything there, the dog simply would not calm down. He and the dog finally left the building mid-storm, the security guard deciding he would rather brave a hurricane than whatever was in that corner.

Several people have noticed strange anomolies such as orbs, shadows or figures in their photographs taken at Whalehead, including the following photo from Heather Bowen, Events Coordinator at Whalehead. Commenting on this particular photo, she said, “On the right side, coming out of one of the guest rooms, you can see what looks like a woman in a teal dress. This photo was taken at the end of the day when there were only three employees left in the house; myself, an intern who was helping me, and a tour guide who was downstairs giving a tour at this time.” 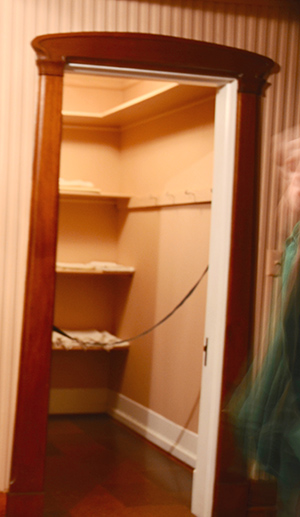 During intense renovations and restoration of the house in the late ‘90s, workmen and expert artisans camped out in trailers around the property during the week and went home on weekends. Many of them reported seeing shadowy figures in the windows at night and believed that the construction going on had disrupted the energy of the house and perhaps had shaken the spirits in the house. After seeing these apparitions, some of the workmen still refuse to set foot in the house to this day.

The Whalehead Club is generally not open after dark, and with so much supernatural activity, the faint-hearted may not want to be in the house once the sun goes down. But one night a year, the doors are opened and thrill-seekers can test their mettle by venturing inside. Don’t miss Creepy in Corolla on Thursday, October 30th!