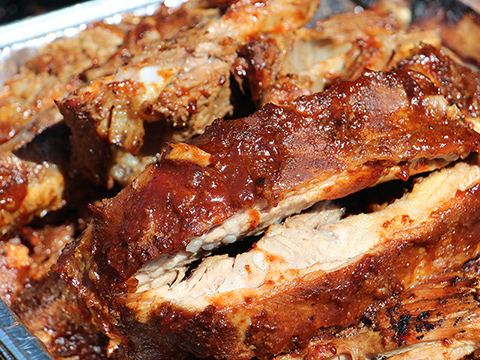 In North Carolina, BBQ is serious business. Not only is it a huge part of the state’s history and heritage, it is so politically charged, a series of bills and laws were deemed necessary to quell the controversy over an official style of BBQ. Whether you favor the Lexington style (which has some tomato) or the Eastern style (strictly vinegar and spices), we invite you to lean in and listen close. Currituck’s top BBQ chefs are about to reveal cooking and flavor secrets that will make you the envy of family, friends and neighbors.

The Low and Slow Down

Our experts differed on a lot of things, but they all agreed on one point: low and slow is the only way. Cooking meat at a higher temperatures may get your dinner on the plate faster, but the results will likely be inedible. The muscle in the meat will seize and shorten – toughening the meat. “Cook your meat at a low temperature for a long period of time and it will break down that tough shoulder and turn it into pork that will fall off the bone,” said Matt Johnson of Corolla Village BBQ. Our experts came in within a few degrees of each other, but David Boultilier of Saltydawg Smokehouse offers this simple math for pork butt, “One hour per pound at 220.”

Here’s the scenario: you’ve been watching the smoke rise from your barbeque grill for 18 hours. Everyone is hungry, like zombie hungry, and you’re itching to plate this puppy and bask in the compliments. You pull it off the grill, stick a fork in it and start tearing. ROOKIE MISTAKE. Every single Currituck barbecue chef that we spoke to had the same advice: hand chop that meat. BJ Beasley, of BJ’s Carolina Cafe put it this way, “We hand chop every morsel of BBQ. With personal touch of hand-chopping, our consistency varies but always hits the spot.”

Your BBQ grill is practically taunting you with delicious smells. You begin to imagine you see smoke signals – and they’re encouraging you to lift the lid. Check things out. Baste. Poke. Flip. You must resist the urge. “If you’re looking, you’re not cooking,” says Boultilier of SaltyDawg Smokehouse.

Not everyone likes a good butt rub.

Some of the most delicious morsels in a bbq plate are the burnt ends and bits of flavorful “crust.” Those little moments of magic were actually meticulously planned out and executed in the rub. “A dry rub makes for a better bark,” offered Boultilier of Saltydawg Smokehouse. Boultilier follows up with secret flavor injection, and a mop sauce during the smoking process for his award-winning bbq. BJ’s Carolina Cafe uses very little rub and no marinade but puts all the effort into the sauce. Paul Robinson of Currituck BBQ Company uses primarily dry rubs, but, SPOILER ALERT, coats their burnt ends with mustard after cooking.

If you’re smoking your butt on straight charcoal you’re missing out on part of the experience. The introduction of hickory wood to the smoking process “gives that nice pink ring and smoky flavor to pork and chicken,” said Johnson of Corolla Village BBQ, “just don’t over smoke it and dry it out.” Trying different woods helps you create your signature flavor, but hickory is a great place to start if you’re looking to replicate that authentic NC style.

Be the sauce boss.

When it comes to sauce, every BBQ chef has some wide open ingredients and some that can’t be shared. Some are brand new innovations, others like the 17 different spices of Sooey’s BBQ and Rib Shack, have been passed down through a family of Kitty Hawkers and Outer Banks natives for over 200 years. “Our spare ribs start with a dry rub, but most of our customers want our rib sauce that we put on as soon as they come out of the cooker.” What’s the secret to that Sooey’s kick? Crushed red peppers. Sooey’s also offers their tomato based brisket sauce for those that like a sweeter bite. Saltydawg Smokehouse chef Boultilier’s secret ingredient: Rum and Whiskey. If you missed the mustard secret offered by Paul Robinson of Currituck BBQ Company we shared earlier, you’ve got some re-reading to do.

Most of our chefs agreed – a plain white bun was all that was needed. “A soft white sandwich bun soaks up the smoky flavor of the pork,” said Johnson of Corolla Village BBQ. Paul Robinson of Currituck BBQ Company agreed, “at the end of the day, the bun needs to be neutral for the BBQ to shine through.” However, Saltydawg Smokehouse put in their vote for potato bread and BJ’s Carolina Cafe made a play for a pretzel bun, “a slab of sweet cornbread and of course, our homemade cole slaw!” Sooey’s BBQ and Rib Shack goes all out by pairing a plain bun with homemade hush puppies and cornbread.

What makes NC BBQ the best?

Every restaurant had this one common thread: you can taste the care. This is a BBQ that simply cannot be rushed in the cooking process and that care and attention shines through in every bite. Robinson of Currituck BBQ Company summed the magic up this way, “I believe it’s just good home cooking that everyone can appreciate.”