The panoramic view atop Currituck Beach Lighthouse never gets old, even when people have been enjoying it for 143 years.

From the top of this historic landmark, you can see the Currituck Outer Banks, the waters of the Currituck Sound and the waves of the Atlantic. It’s a sight everyone needs to glimpse at least once when they visit Currituck County.

“You get a 360-degree view of the horizon,” said Lighthouse Keeper and Site Manager Meghan Agresto. “There is nothing like it.” 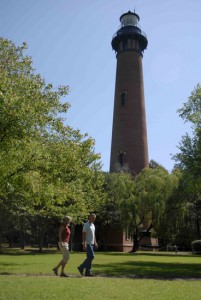 And, on Dec. 1, you can climb the Currituck Beach Lighthouse for free from 11 a.m. to 4 p.m. before it closes for the year. This December marks the landmark’s 143rd year of operation. Its 20-second light rhythm still illuminates the night with three seconds on and 17 seconds off. The lighthouse creates a flash that can be seen by ships up to 18 nautical miles away.

Built in 1875, the Currituck Beach Lighthouse provided a much-needed warning to help ships steer clear of the shifting sands that surround the barrier islands of the Outer Banks. Known as a first order lighthouse, it has the largest of seven Fresnel lens sizes.

Decades ago, lighthouse keepers would climb the 220 steps up the tower carrying lard oil to fuel a lamp that had four concentric wicks. This was the lighthouse’s original source of light. By the year 1884, the lighthouse was using mineral oil. In 1933, a lightbulb was installed to replace the oil.

While the lantern room, which houses the lens, is not part of the climbing tour, you can see it when you step outside at the top of the tower. Just remember to turn your gaze up toward the lighthouse.

“The lens itself is priceless,” Agresto said. “Nobody makes them anymore. It contains original prisms made in Paris.”

If you’ve never been to the lighthouse, give yourself about an hour to complete the self-guided tour. You’ll want to spend time at the base in the archives room reading about the different lighthouse keepers. Along the climb up, museum-quality exhibits showcase the tower’s history from its construction to renovation efforts. Unlike other lighthouses in North Carolina, there is no limit on how much time you have to explore the lighthouse, read the exhibits and enjoy the outdoor gallery.

Be sure to stop at the museum shop on the lighthouse grounds before or after your tour. The former assistant lighthouse keeper’s home offers a range of souvenirs and gifts, from ornaments and books to jewelry and T-shirts.

Of course, if you can’t make it on Dec. 1, you can climb the lighthouse before then for $10 admission. Children ages 7 and under can climb for free with constant adult supervision.

In general, the self-guided tours run daily 9 a.m. to 5 p.m., from mid-March to Dec. 1 weather permitting. Between Memorial Day and Labor, the lighthouse and grounds are open on Wednesdays and Thursdays until 8 p.m. The lighthouse is closed on Thanksgiving. During the week after Thanksgiving, you can tour the lighthouse from 11 a.m. to 4 p.m.