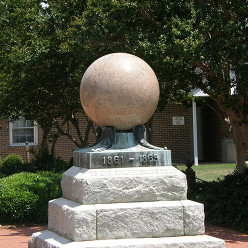 A large pink granite ball mounted on a base with a plaque that reads “To Our Confederate Dead 1861-1865”. The Union troops camped on the Courthouse lawn during part of the Civil War and Colonel Henry M. Shaw was in charge of the Eighth Regiment of North Carolina Troops. He lived in Indiantown in Currituck. The settlement is now called Shawboro and he is buried there. He was one of the signers of the Paper of Secession.